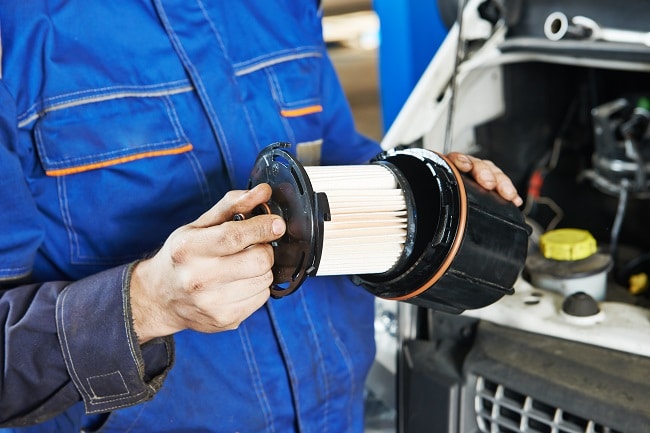 Keeping your car running right depends on a lot of factors. As every car owner knows, something can go wrong at any time, and for this reason, it would be wise to know of the symptoms of certain problems. This way, you can stop them in their tracks, and get the problem fixed before it ends up costing you more money.

One very common problem with cars, that can be fixed early if the problem is identified, is when the car’s fuel filter begins to go bad. In your car, the fuel filter is nestled in the fuel line, and it’s primary purpose is to filter out any dirt, particles and other non-needed substances, that can mess with the proper functioning of your car. Unfiltered fuel, or fuel that has an overabundance of external substance in it, can end up causing rapid system failure for the fuel pump and injectors.

Overall, your fuel is able to burn more efficiently with cleaner fuel, thus giving you a smoother ride, and a longer life for your vehicle. Being able to identify a bad fuel filter before things go south can be very beneficial in terms of saving you money on repairs that wouldn’t be needed if you caught the problem in time. In this list, we’ve compiled some of the most common symptoms of a bad fuel filter, so you can identify the problem as soon as possible.

Your fuel filter will eventually get clogged up over time. It just happens, and it’s a fix that all car owners will have to deal with. The good thing, it’s an easy fix, and not that complicated. A failing fuel filter can seem like a big problem at first, so don’t go overboard before checking your fuel filter first after noticing some problems with your car. Here’s some common symptoms of a bad fuel filter to look out for …

In order for your car to be able to push out some power, it needs to have a clean and steady stream of fuel coming in through the fuel injectors. A very common sign of a bad fuel filter is when you begin to notice that your car is not driving as efficiently as it normally does, in terms of power and torque. Most of the time, car owners are very aware of the normal state of their car, so identifying a lack of engine power can be rather easy to point out.

Often, when your car’s engine power is reduced, the ECU restricts the output of the engine in order to protect it. When this happens, a check engine light will likely pop up. Let’s using bluetooth obd2 scanner to find the code.

A bad fuel filter is not the only sign of an engine’s lack of power, so be sure to check for other problems such as bad fuel injectors, or a faulty airflow sensor.

Some problems do not become very prevalent when driving under normal road conditions. Sometimes, it takes a little change of scenery, and perhaps some uphill action, to put a little stress on the car to see some problems expose themselves. If your car happens to be stalling when under stress, such as going uphill or over some terrain, it could be very possible that this is a sign of a bad fuel filter.

If not enough fuel is being sent through the fuel injectors, the engine will not operate as efficiently as it’s supposed to, especially when there is more strain then normal being put on it. The best way to see if your car’s stalling problem is due to a bad fuel filter is to give your car a fuel pressure test.

Such as in the symptom described above, an engine misfire problem will often not expose itself until the engine is experiencing more strain than normal. This happens when the car may be going uphill, or carrying more load than it’s used to. When the engine reaches certain points of stress being put on it, it will need more and more fuel being injected to be able to operate correctly. If your fuel filter is clogged, and your car is experiencing extra stress, this may cause a misfire in your engine.

Often, it’s not a single engine cylinder that’s the culprit of the problem, and it’s commonly other factors that are working against it, such as a bad fuel filter. Identifying this problem while driving under normal conditions can be tough, but once some extra strain is added, the problem can become revealed rather quickly.

If you happen to be sitting at a red light, or perhaps are parked for a bit, and you begin to notice that your car is vibrating, and seems to be buzzing around more than normal, this could be a symptom of a bad fuel filter. The shaky idling of your car could be related to how the fuel filter is very clogged up, so the engine is not receiving as much fuel as it needs through the injectors.

It’s safe to say that if your car won’t start, this could be because of a ton of issues. But, sometimes you can get lucky, and the reason won’t be as drastic as others. If your car won’t happen to start, a good place to check first would be the fuel filter, and if it needs replacing or not. If your fuel filter is fully blocked up, it’s likely that you’ve pushed off some symptoms for a bit, because fuel filters should be replaced well before the stage where they are fully blocked up. But the battery also a reason that make car won’t start, so recharge with best battery maintainer for car if you can.

As you can see, there is an abundance of common symptoms that you can look out for, in order to identify a bad fuel filter before more costly problems arise. These symptoms can be as simple as noticing your car is shaky, noticing reduced engine power, experiencing engine misfire, etc. Take note of all of the symptoms described above, and you’ll easily be able to identify a bad fuel filter before things become worse than necessary!