How To Check Car Fuses With A Multimeter? 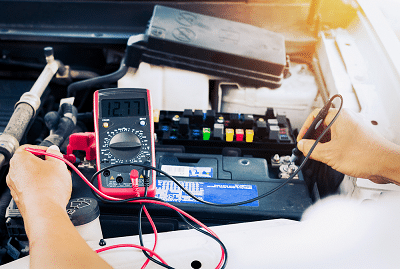 The electrical system in a car can be one of the most annoying systems to find the problem of something with.

Sometimes, however, the problems in the electrical system is something simple such as a bad battery or fuse. If it is a bad battery, try to use best battery tender to maintain it. It is a tool to recharge your battery.

In this article, we will teach you how to check a fuse to see if it is bad or not using a automotive multimeter.

This should be one of the first things you do if you are having issues with a specific area of your car because it is the easiest and a lot of times is the problem which will save you a headache if you just start there.

What Is A Fuse

First, though before explaining how to test a fuse with a automotive multimeter we will cover what a fuse is. A fuse is simple a wire normally surrounded by some plastic that completes a circuit when plugged in. Most fusses have two prongs with a small wire running between them.

When the fuse is plugged into where it goes these prongs touch another piece of wire and complete the circuit. It is that simple. The thing is a fuse is designed to break through if something goes wrong. This is because when the fuse breaks or blows, it will protect the more expensive part of getting damaged.

A fuse blows when to much power runs thru it. This extra power causes the metal wire to burn up breaking the circuit. When the circuit breaks the extra power cannot get to the main part that can not handle the extra power. In cars, there are normally fuses in two spots. There is a fuse box under the hood with all kinds of fuses in it, and there is also sometimes some fuses under the dash on the passenger side. What is a fuse?

Knowing where your fuses are is important if you want to check them. Some of the fuses are a different color, and each color indicates how much power it can handle. The bigger fuses though are normally a dark gray though and not a color.

On the small fuses, you can normally see thru the colored plastic, and this allows you to see if it is blown or not without testing it. Also, blown fuses may have discoloration which is a sign that it is bad and needs to be replaced. The big fuses though you can not see the wire, however, so these you will have to test if you think something is wrong with it. Read on to learn how to do this.

How To Test Fuse

The first step before testing a fuse with a automotive multimeter is making sure that the car is off and the keys are not in the ignition. This will help keep you safe when pulling the fuse out and also protects the car. The next step is to locate the potential bad fuse. To do this, you go to the fuse box and look at the diagram or in the owners manual and find the one that corresponds to the system you are having trouble with.

For example, if your power door locks aren’t working, then you will want to pull the fuse that goes with that. Then to pull the fuse, you do literally what it is called, and that is pulled straight up on the fuse. You want to make sure you pull straight up because you don’t want the prongs getting bent or damaged as you pull the fuse out. Once you got the fuse pulled you can visually inspect it. If it is a clear plastic you can try to see if the connection seems broken. If you can’t see the wire through, then it is time to get the multimeter out. To use the multimeter you first have to turn it on and get the probes out. You then can set the multimeter to ohms.

This will measure the resistance of the fuse. You can then touch the probes together. This gives you a baseline reading and will tell you roughly the number you will get once you put the probes on the fuse. Once you have an idea of the reading, you should expect you can connect the probes to the fuse.

To do this, you just have to touch one probe to one prong and the other to the other prong. This will give you a reading. If the reading is close to what it was when the two probes touched, then the fuse is fine. If it does not give a reading, then that means the fuse is blown. This is because the current it is trying to send thru the fuse is not making it back thru. If the fuse is blown, then it is pretty simple to replace it. You just have to buy another fuse that is the same and plug it in. If the fuse is not blown, then you will have to dig deeper into your electrical problems which can be frustrating. That is why it is good to start with testing the fuse first because for most people it will only take a couple of minutes to test the fuse.

Another thing to remember if it isn’t the first fuse that you test is to make sure to look at the diagram closely and that you test all the fuses that go to a particular system. Sometimes a system may have more than one fuse, so you need to make sure you test them all with the multimeter to rule out one being blown.

So now you know how to test a car fuse with a automotive multimeter. It is an easy task, and pretty much any multimeter can do it successfully. You can either use the resistance or ohm feature on your multimeter to check the fuse, or you can use the continuity setting to test the flow of current.