What Is A PTO (Power Take-Off) On A Truck And What Does It Do? 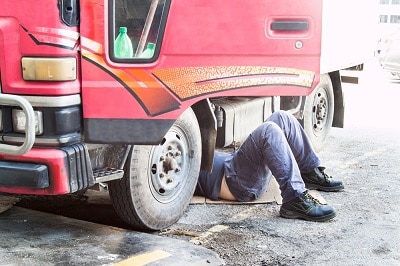 Trucks have a lot of different parts, and some of them are things that are not in a normal car. One of those is the PTO.

PTO stands for power take-off, and we will cover what it does in this article.

You might be surprised, but you probably see vehicles with PTOs every day and might even have used one yourself, even if you don’t know what it is.

Continue reading to learn the specifics of how a PTO works and the uses it has when it comes to a truck. We will also explain where it is installed at and other various information about it.

A PTO or power take-off is a device that takes power from one source and gives it to another thing that does not have its source of power.

A PTO is a transmission that connects from the truck’s engine to another device to help that other device run.

Depending on the way the PTO is connected you can bypass it by pressing on the clutch.

This will cause a separation in the connection between the PTO and the engine if you do not need the power from it.

How does PTO/Power Take-Off work?

Another way of explaining what a PTO is is to explain how it works.

The way the PTO works is that it turns rotating power into hydraulic power.

The power in the pump can then be used for various purposes as it builds up.

By using a PTO, you can use the same engine to power multiple things.

This is useful because it is cheaper than having two motors, and also more efficient because less energy is being lost in the engine and instead is being transferred somewhere else.

For trucks, PTOs can be used to run all kinds of different things.

For example, they can be used to control the hydraulics on a dump truck and raise and lower the bed. They are also used a lot for towing wenches which allows the truck to move other vehicles or things that need to be towed. On fire trucks, a PTO is normally used to run the water pump that helps the water spray thru the hose.

Other uses include running the compactor on a trash truck, running a tree spade or lift mass assembly, and powering blowers used to move dry material such as concrete.

They are even used for the bucket arms on a bucket truck to help move them for when people have to work on power lines or cut trees. They are even used for hot water extraction for carpet cleaners. Like it has been said PTOs are a problem on vehicles seen every day and you didn’t know it.

There are a couple of different types of PTOs, and they vary on how and where they are connected.

The two common types are split shaft and sandwich shaft.

On a split shaft, the PTO has mounted, and it is a new gearbox. There is a gearbox facing shaft that transmits the engine power to the split shaft and then the axel-facing shaft which takes power and moves it to the axel. On this type, you can not operate the PTO while driving. It can only be engaged when the vehicle is stopped and is always connected to the rear axle, so as not to interfere with driving. You change between the PTO and driving with a clutch.

The other kind is a sandwich split shaft which is mounted between the engine and transmission. The driveline has to have room for this type of installation since it comes directly from the engine. Since it is connected directly to the engine, this type of installation can create a lot more power. On a larger truck, you could install two or three different PTOs because there are that much room and a lot of space or different connections on the gears. This means that you could operate multiple accessories with the same truck.

A best GPS for truckers is important thing the driver should get, every one should have one.

A PTO is a power take-off. It converts power from an engine and sends it to an accessory that doesn’t have its power source. They are used a lot more than you might have previously realized. Trash trucks, bucket trucks, fire trucks, and most other trucks all have a PTO that is used for something. They are a cost-effective and efficient way to run different things. Like it has been said, they work by connecting one end to the engines gears or crankshaft and the other to a hydraulic pump. This pump stores power off the engine and can convert it into whatever form is needed.

PTOs come in all kinds of forms, and each can operate in its specific way. Some trucks even can have more than one PTO on them. Wenches, blowers, and other accessories can all run off PTOs as well. The important thing to remember when using a PTO is making sure that it is installed right and maintained. This is true for all parts on a truck though. Now you should have a better understanding of the applications of a PTO and even more importantly how a PTO works. You now know it connects to a trucks motor and can convert the energy from it to run something else.

1 thought on “What Is A PTO (Power Take-Off) On A Truck And What Does It Do?”