Which Is Better Between OBD2 Wifi Vs Bluetooth 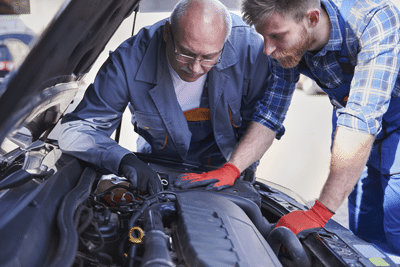 So if you have ever had a check engine light come on on your car, then you or someone else has probably used an OBD2 scanner to check the code to figure out the issue.

Sometime that issue might have just been something simple such as a sensor needing rest, but other times it may be something more complicated.

On these more complicated things, you might have wished to be able to send the information to your phone or computer so you could save it or be able to take it with you to the auto parts store easier.

Well with wifi adapters and Bluetooth adapters you can do just that, but which method is better for transferring information from your scanner to your other devices. Well, continue to read this article to find out the pros and cons of each method.

What is an OBD2 scanner?

Before going too far though, it is a good idea to make sure everyone knows what is being talked about when OBD2 scanner is mentioned.

Well, an OBD2 scanner is a little device that plugs into the computer system in your car to read the codes that it puts out.

The connection is normally under the steering wheel and you just plug the pin end, into the slot.

Some small cheaper scanners are just little handheld devices with a small screen that is only an inch or so and the cord just plugs down in there.

You click through the codes and are able to see what the computer says is wrong. Other more expensive versions have a wireless transmitter that plugs in and you are able to use a tablet to read the codes.

The ones we are going to be talking about in this article though use an adapter to either transfer the information from the scanner to a phone or tablet using wifi or Bluetooth.

Bluetooth is a protocol method to transfer information to phones from a close distance.

The good thing about Bluetooth is it has been around for awhile now and hasn’t really changed.

Bluetooth sends out a frequency that a phone can scan for. If it finds any close enough devices that are putting out a Bluetooth single, then it can connect to it.

Some of the advantages of Best Bluetooth Obd2 Scanner is the reliability of it.

Since it has been around awhile, most phones or devices that you have will be compatible with it.

Your car’s system may even be set up with Bluetooth. Bluetooth adapters also tend to be a bit cheaper than wifi ones.

Another reason why Bluetooth is reliable is that it can be used anywhere.

Bluetooth does not require any other system to transfer the information.

The frequency or single it sends out is all built into it and that makes it so you are not dependent on having something else such as wifi or a network service.

One big downside of Bluetooth though is it can be slower than a wifi transfer.

Since it is older technology being used it doesn’t always transfer as fast as wifi, but like has already been between you can transfer anywhere and sometimes if wifi is bad, the Bluetooth will be faster.

The other downside is the range that you can transfer. You have to be pretty close to the adapter to get it to transfer to your device. Walls and things can really interfere with Bluetooth.

That means you pretty much have to be in the car or right by it to get it to work.

You can’t really have the car in the driveway and be in the house or shop and still transfer the information.

Wifi transfers of information is the newer method. Wifi uses your device to make a network to make the transfer.

It does not use the internet or your cell network, but instead just creates a local network that the two devices can connect too.

Wifi adapters are nice because the transfers happen more quickly than with Bluetooth.

This is because the connection protocol being used is newer. Also, since the transfer is down over a network it has a lot more range.

If you have a shop and need to send the information to your computer in the building, then you can with wifi where you can’t with Bluetooth.

Wifi is also still a really reliable method. Also, most computers don’t have Bluetooth, but they do have wifi so you can send the information to more than one kind of device if you use wifi. With Bluetooth you are pretty much limited to sending things to your phone and looking it up on there.

The downside to wifi adapters though is that they can cost more.

The extra cost isn’t too much of an issue though because they aren’t that much more.

Also, setting up a wifi reader can be a little harder because you might have a password on your wifi and not be aware of this.

This can be hard to work around if you set up a password in the past for connect your device to something else with wifi and then forgot the password.

Which to buy between Bluetooth Adapters vs Wifi Adapters

So now the question is which adapter to buy between wifi and Bluetooth.

If you want the most reliable method possible, then Bluetooth is the way to go. Bluetooth is not going anywhere and will work no mater where you are at and pretty much every phone. It may be a little slower, but it is reliable.

If you are working in a shop environment though or at home, then that is when you might want to consider getting a wifi adapter. The extra range is nice and saving time with faster transfers can be really important especially in a shop setting. Also, if you are wanting to use a device that doesn’t have bluetooth such as a computer, then a WiFi adapter is your only option.

Personally, though I think you should get one of both types. They aren’t that expensive and it is really nice to be able to send information to your device and not have to rely on the little screen of the reader.

Also, being able to save the codes or look it up on the phone makes things faster. You can get a Bluetooth scanner adapter for the car when you are out and then a wifi one to keep at home. That way you have one with you at all times and one that you know will work.

After reading this you can see that both Bluetooth OBD2 adapters and wifi ones have their purpose. Bluetooth ones are reliable where wifi ones are fast. Which kind you get depends on where you live and how often you will be using it, but with this information, I am sure you will be able to find the one that is right for you.

16 thoughts on “Which Is Better Between OBD2 Wifi Vs Bluetooth”