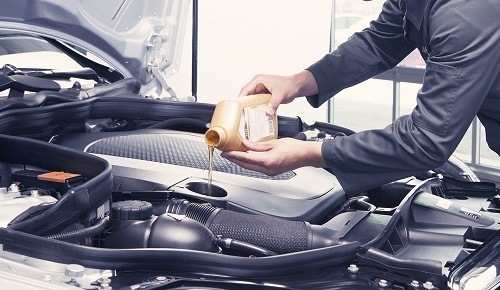 Your car has a few key fluids in it, but the two main ones are gas and oil. Normally, these two fluids don’t mix very often. Sometimes, they do and it is okay, but most of the time if they are mixing in large quantities, then you have an issue. That is why in this article we are going to look at the question of why does my oil smell like gas?

We will cover the reasons for your oil to smell like gas, and how to know when you have too much gas in the oil. We will also cover how that gas is getting into the oil and what you can do about it. Read on to learn everything you need to know for why your oil may smell like gas.

How much is too much

So, you might go to change the oil and then when the old oil starts to flow out of the oil pan and into your collection container you start to smell gas. Gas has a fairly distinct smell, so most people can recognize it if they smell it, especially if you know how to change your own oil. How much gas in the oil is too much though? Should you be concerned if you smell gas in the oil? Well, at first you shouldn’t be too worried if you smell a little gas coming from the oil. It is perfectly normal for a little gas to sometimes mix into the oil under normal engine operations. How much is a little though? Well, if the smell of gas isn’t too strong, then it is probably in the normal range, but you can test the oil and see how much gas is in it if you are really concerned.

When testing the oil to see how much gas is in it, you should end up with no more than about two and a half percent of gas in the oil. If there is greater than this amount of gas in the oil, then you have a bigger issue and more gas getting into the oil than would happen in normal operation. If you don’t have a way to test your oil though, then just know if the smell of gas is strong, then you probably have too much gas in the oil. The oil will dilute the gas pretty good and get rid of most of the smell if it is less than two and a half percent. That means if you have a strong smell of gas coming from the oil when you change it, then you should investigate the issue.

Why is too much gas in oil bad

Before going farther into determining why your oil smells like gas, we will briefly touch on why it is bad for too much gas to be getting into your oil. There are a couple of reasons why you don’t want your gas and oil mixing. The first is obvious, and that is because the gas that is mixing with the oil is not being burned and there for being wasted. Gas is expensive, so you don’t want it going into your oil and being disposed of instead of burnt. The next reason though is because it can lead to damage to your vehicle that is way more expensive than the gas being wasted. When gas mixes with the oil, it causes the oil to lose viscosity and majorly reduces the lubrication ability of the oil. This means that the cylinder walls can get damaged along with the bearings leading to all kinds of failures. That is why if you notice too much gas getting into your oil or a strong smell of gas from your oil, that you get the problem taken care of right away.

Signs of gas getting into the oil

So, now that you know that it is bad for a lot of gas to get into your oil we will cover some of the signs that gas is getting into your oil that you can notice before you change your oil and smell the gas fumes. The first is if you start to smell a large amount of gas while driving. This is a significant gas is escaping the engine and getting somewhere it shouldn’t be allowing you to smell the fumes. Another thing that can happen is white smoke coming from your tailpipe. This is normally a sign that oil is burning, but if you got oil getting into the engine, then that means you might have gas getting out of the engine and into the oil. That is why if you notice smoke from your tailpipe you have things checked out.

Finally, if you have low oil pressure or high oil levels, then you might have gas getting into the oil. The low pressure is because there is not a tight seal and that is where the gas is getting thru. The high oil level is an indication because the gas mixing with the oil is increasing the volume of the oil. One easy way to stay on top of your oil level and see if it is rising is to check the dipstick regularly. Also, if you have a smell of gas on the dipstick, then that is a sign that too much gas is getting into the oil.

So, if you are noticing gas getting into the oil, then what should you check? Well, that varies with the type of engine you have. There are two main types of engines the older carbureted engines, and the newer fuel injected engines. We will cover the things to check for both so no matter what kind of engine you have you can solve your problem.

On a carbureted engine the issue can come about from a badly adjusted carburetor. This is because if too much gas is being sent into the carburetor, then not all can burn and the overflow will slowly drain down the cylinder walls and into the oil pan. This will also mess the spark plugs up, so one way to check for this issue is to pull a spark plug and see if the end is blackened. If it is, then you should have your carburetor adjusted to put out less fuel.

The next thing that could be the issue is a faulty cylinder. If you have a cylinder that is not firing correctly, then the fuel will condense and run into the oil pan. The way you can tell if you have a bad cylinder is if you have a shuttering or knocking while driving. If you do, then you should have your engine looked at and the problem fixed. Lastly, you might have a bad gasket. If you have a gasket that is leaking, then the gas can leak thru the gap in the seal and mix with the oil.

So, if you have a carbureted engine and start noticing the smell of gas in your oil, then these might be some of the reasons why. There are also a few more like issues with the fuel pump and things, but these are the common ones. When trying to solve the problem be sure to check the fuel pump and make sure it is pumping the right amount of gas into the engine, check the spark plugs, check the carburetor, and check all the gaskets. One of these should be the issue and if not, then check your engine’s compression. After having the issue fixed be sure to change the oil so no gas is in it and you can make sure the problem is solved.

Fuel injection engines can also have the same gasket issues as carbureted engines though and the computer may not notice that, so if you are getting gas in the oil and don’t have injection issues, then you should have the seals of your engine checked to make sure there aren’t leaks and have the compression of your cylinders checked if you still can’t find the problem. By the way, you can use best automotive diagnostic scanner to get your obd2 code of your car.

So, now you know that gas in your oil is bad and if your oil smells like gas too much, then you need to find and fix the problem. If your oil only smells like gas a little though, then that is normal. If you are really concerned, you can have the oil tested, and if the gas is greater than two and a half percent, then you need to have your engine looked at. You also know that different types of engines have different potential issues, but you know what to look for in both types of engines so no matter what you drive you can have your vehicle taken care of and fixed if you start having too much gas mixing with your oil and you know that it is important to have it fixed as soon as possible before expensive damage occurs.